I have made carnitas several different ways: Instant Pot, slow cooker, stovetop and in the oven. But I think this might be my best recipe yet! It is essentially a “set it and forget it” type of cooking which I love immensely. I am in week 4 of the stay at home quarantine and have some Netflix to catch up on so being able to step away from the kitchen is very important right now.

Another great thing about carnitas is that it is a low cost cut of meat and is essentially a pantry dinner so in these times when we are not going to the store as often, you can make adjustments depending on what you have on hand. The most important thing is the protein of course. Spices can vary although I would hope that most of you have the absolute basics: cumin, salt and pepper.

For protein, I am using pork shoulder, also known as pork butt (even though it is not from the butt!!) . I recommend this type of cut that lends itself well to slow and low cooking because it has a high fat content, allowing the meat to get super tender and juicy. Oh ya! Alright, let’s grab some ingredients and get ready for the yum!

To begin, cut the pork shoulder into about two inch sized pieces. Try to make them all close to the same size as possible to help them cook evenly. Throw the pieces into a bowl. Add the oil. I like using avocado oil because it has a more neutral flavor but if you only have olive oil, use that. Add the cumin, cinnamon and salt and pepper and mix well so all pieces are cover in the spices. Add the garlic and onions to the bowl. Squeeze the juice from the lemons and limes over the pork then add the squeezed citrus to the bowl and stir everything together.

Dump the ingredients from the bowl into a casserole dish or roasting dish. You can see the lemons and limes, onions, garlic, etc are all in the dish. You want the pork to braise with all those yummy ingredients. Add the bay leaves around the ingredients. Place pats of the bacon fat/lard around. Pour the heavy cream all over everything. Many carnitas recipes use milk instead of cream but milk contains extra carbs and sugars so to cut down on that, I’m using heavy cream. Make sure the ingredients are in an even layer. Cover tightly with two layers of tin foil. Seal the foil all around the edges of the cooking vessel.

Cook at 275 degrees for 3.5 hours. Try not to open the oven during this time because you don’t want to disturb the braising process. Trust the process.

At the 3.5 hour mark, remove the pork and carefully pull up a little corner of the foil. Stick a fork in a piece of pork and if it slides easily into the meat, the pork is ready. If there is some resistance, replace the foil and continue cooking in 15 minute increments, checking at each interval until it is literally fork tender. Mine was absolute perfection at 3.5 hours. Do not overcook or the meat will be dried out. When it is ready, remove the foil and strain the juices through a strainer into a bowl. Remove and discard the lemons, limes, garlic, onions and bay leaves. Do NOT discard the juices!! Return the meat to the casserole dish. Spoon the juices generously over the meat. Turn the oven to broil and cook, uncovered, an additional 3-8 minutes until the top layer of the carnitas get all crispy like you see below. Watch the meat carefully so it doesn’t burn.

You can serve this immediately in keto cheese taco shells, over greens for a salad, right out of the casserole dish with a fork, really any way you can think of. I took about half of the carnitas and mixed them in a bowl with a bunch of grated cheese, salsa and chopped pickled serrano peppers and wrapped the mixture in cabbage making little burritos topped with mexican crema and sliced avocado. I served them with some Spanish cauliflower rice and roasted asparagus. Over the next couple of days, we continuted to eat the leftover carnitas and they seemed to be even better the next day!! 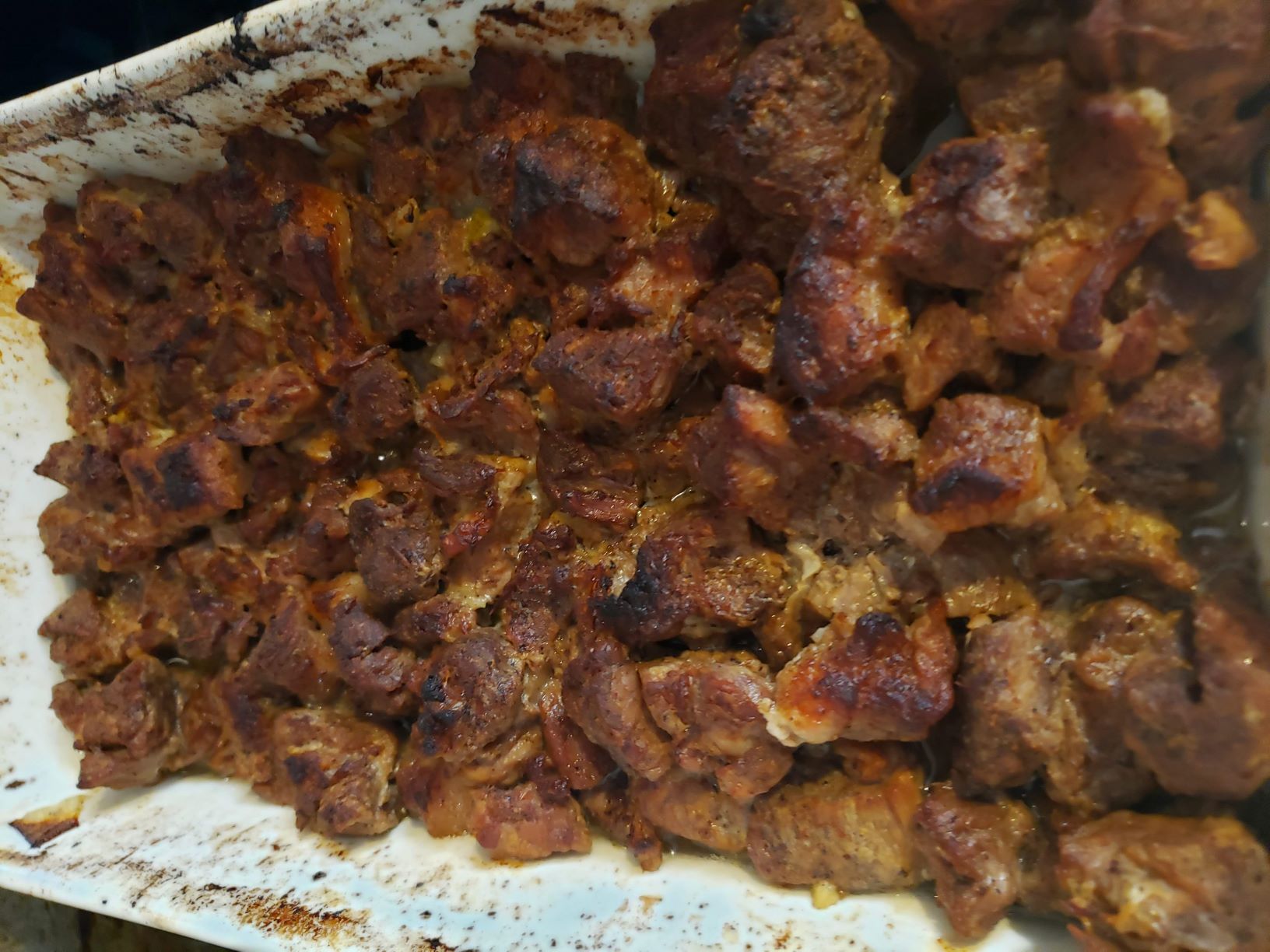 I am not including macros for this recipe because all of the ingredients are removed from the meat after cooking.  Also, macros will change depending on how you serve it.